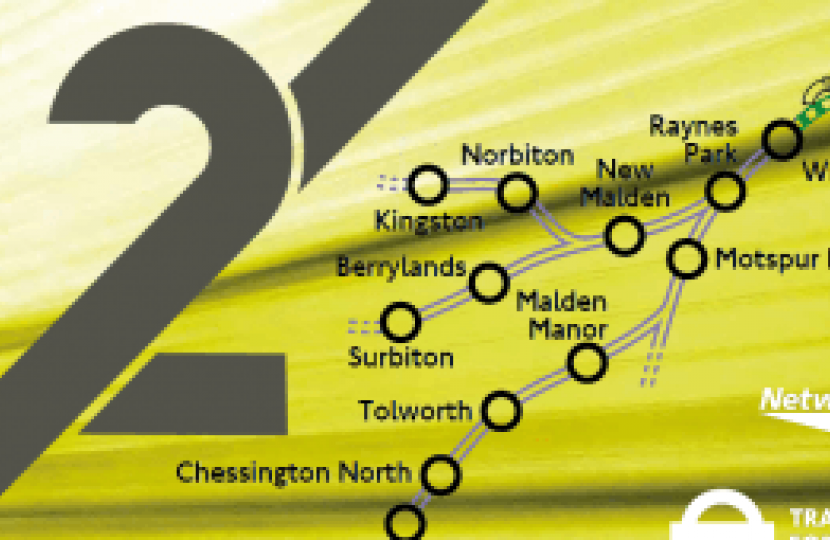 1.         Crossrail 2 is a vital infrastructure project for London’s future. It has benefits for the South East region as well as the nation as a whole. Crossrail 2 will be the first significant investment in rail infrastructure in South West London for many years. While Crossrail 2 presents an excellent opportunity for Kingston & Surbiton residents, it is vital at this stage to ensure that the proposals are suitable for local residents’ needs when the service comes online in 2030.

2.         National Rail’s Wessex Route Study (August 2015) notes that the number of passengers on trains going through the constituency will haveincreased by 40% by 2043 and that some peak services are already 20% over capacity. The route Study concludes that of various options to deal with capacity “Only Crossrail 2…looks to have the potential to get close to the long term target train numbers to cope with growth.” In the absence of any viable alternatives, Crossrail 2 is not a luxury but a necessity if peak time rail passengers are to have any hope of travelling on trains that are grossly overcrowded.

3.         For passengers who do not need to access Waterloo, Crossrail 2 would be of particular benefit. Those passengers would avoid Waterloo (the busiest terminus in Europe) and have direct access to Victoria, Tottenham Court Road, Euston/St Pancras (for travel to the Midlands and the North and to the continent via Eurostar) and interchanges with Crossrail 1 and a wider variety of underground lines.

4.         For passengers who do need to access Waterloo, Crossrail 2 will alleviate overcrowding on Waterloo services by diverting other passengers to Crossrail 2 services.

5.         It is welcome that all Crossrail 2 stations will have step free access. Worcester Park, Kingston and Surbiton stations are the only step free access stations in the Borough at present (and accessibility is far from ideal at Kingston or Surbiton). This is wholly unacceptable so the installation of ramps and, where necessary, lifts at every other station would be a very positive move.

6.         As well as these benefits for local residents, Crossrail 2 will also have important benefits for local businesses, making it easier for people to travel to Kingston for work, to do business or to sample our excellent retail and entertainment offerings.

7.         Despite all of these undoubted benefits of Crossrail 2, having spoken to numerous local residents I have concerns about the current outline proposals which I have set out under the following headings:

as well as some miscellaneous points.

8.         Local residents want an end to terrible overcrowding on peak time services that Crossrail 2 would bring. But local residents who need to commute to Waterloo, and have bought houses in proximity to a railway station that allows them to reach Waterloo directly, are understandably concerned that Crossrail 2 does not significantly affect their existing services.

9.         It would be informative to see Transport for London’s (TfL) survey data on the ultimate destination of passengers boarding at stations in the Borough to see what proportion of customers would have their journey disrupted by the removal of a direct service to Waterloo station in favour of a Crossrail 2 service.

10.      The table below, based on Crossrail 2’s Factsheets, shows how peak services from stations in the Borough would change under Crossrail 2 from 2030.

* Just outside the constituency but used by constituents.

11.      Every station would see increased services into London, but a reduction in Waterloo bound services in favour of Crossrail 2 services. The four stations on the Chessington branch and Berrylands would lose their direct services to Waterloo entirely. While there is the option of interchange to a fast Waterloo service at Surbiton or Raynes Park, having to change trains to get to Waterloo significantly reduces the attraction of Crossrail 2 for passengers who currently have a direct service.

12.      Ideally, all current peak time services would be maintained alongside the new Crossrail 2 services. It is understood that some reduction in Waterloo bound services from across the network is required to reduce congestion at Waterloo but as many Waterloo services as possible should be retained.

13.      The wholesale removal of all Waterloo services from Berrylands Chessington South, Chessington North, Tolworth and Malden Manor is highly undesirable and must be reconsidered.

14.      Crossrail 2 is an extremely expensive project and TfL is understandably keen to illustrate to the Treasury how it is a good investment for a variety of reasons. One of those reasons is that it “unlocks” housebuilding opportunities by connecting central London to areas that are currently inaccessible, such as the Lea Valley in Tottenham. This will help solve London’s housing crisis, regenerate a neglected area and provide with stamp duty receipts from new homes to offset the cost of Crossrail 2. The same may be said of other areas on the proposed route.

15.      With respect to Kingston Borough, Crossrail 2 should not be seen as a pre-cursor to excessive development, beyond the housebuilding already required of Kingston by the Mayor of London pursuant to the London Plan.

16.      Moreover, Crossrail 2 should not be seen as “unlocking” Green Belt or Metropolitan Open Land for development.

17.      The increase in frequency of peak services to four per hour will be welcomed on the Chessington branch, where infrequent services and frequent delays and cancellations cause many local residents to drive or take the bus to other stations such as Surbiton. None of the Chessington branch stations have step free access so Crossrail 2’s commitment to accessible stations is welcome. An increase in off-peak services, currently hourly from Waterloo after 20.46 on a weekday with the last service at 23.00, should also be provided for.

20.      Chessington South currently has a car park for four vehicles. TfL must explore solutions to the problem of additional parking required at Chessington South. TfL must also explore solutions to mitigate the additional traffic on the severely congested A243 which runs from the M25 to the A3 through Chessington. The only solution that is likely to deliver (for both problems) is to bypass the A243 entirely and to create a new station with access to the bypass and parking further down the already laid (but unused) track that continues past Chessington South station.

21.      There is one level crossing in Kingston Borough at Elm Road in New Malden. A further two level crossings on West Barnes Lane by Motspur Park station and by Burlington Road are just outside the constituency and the Borough. All three level crossings are already in need of improvement. Factsheet SW1 notes:

“The proposed increase to train services mean it is likely that a small number of existing level crossings in the area would need to be removed to increase safety and improve local road connectivity. This could include both the level crossings on West Barnes Lane near Motspur Park station, and Elm Road near New Malden. Network Rail will work closely with local communities and the local authority to find an appropriate resolution for each crossing. This could mean access across the railway is provided by a bridge or an underpass, or via a diversion around the railway. We are still at a very early stage in the development of our proposals for Crossrail 2 and the process to understand the work that we need to carry out at the level crossings along the route has not yet started. When our plans are further developed we will carry out further consultation in the local areas about the potential impacts of closing any level crossings. However, we would welcome early input from the local community as part of this consultation.”

a.             Elm Road is an important access road including to three schools and a large GP surgery on the other side of the railway line. Pedestrian passage down Elm Road would have to be maintained. A footbridge would impede access for wheelchair / buggy users and those who find it difficult to walk. Raising the railway tracks to create an underpass should be considered;

b.             Elm Road is used by vehicles as a cut through from Kingston Road to New Malden High Street. If the level crossing cannot be maintained, the impact of additional traffic on New Malden High Street and Kingston Road, including at the highly congested Fountain Roundabout should be explored in detail and plans to mitigate that additional traffic should be presented. The emergency services would have to be consulted on alternative access.

25.      West Barnes Lane by Burlington Road is another busy road. Closing it to vehicular access would cause significant traffic problems elsewhere on other roads and would be opposed. There is already a footbridge over the railway tracks but this does not provide a solution for wheelchair / buggy users and those who find it difficult to walk. An underpass or the sinking of the railway line will be required.

26.      TfL’s October 2015 publication “Crossrail 2: regional and national benefits” provides a compelling argument for the benefits of Crossrail 2 beyond the areas earmarked for new stations. In the circumstances, Crossrail 2 should not be financed by a precept on Council Tax for residents in London Boroughs benefitting from Crossrail 2 stations only.

27.      It is accepted that this is only a preliminary consultation but much more detail will be required in future to allow local residents to engage in full with the proposals. The earliest possible notification must be given to any residents whose property may be affected by the proposals.

28.      Factsheet SW4 (Surbiton and Berrylands) notes that “Surbiton would also retain fast and semi-fast services into Waterloo. These would operate to at least the current service levels, with the potential to increase the frequency to take advantage of the capacity released by Crossrail 2 services at Waterloo.” It is essential that Surbiton retains its fast services to Waterloo. While it is understood that no absolute guarantees can be given about any rail services in 2030, based the statement in Factsheet SW4 local residents are entitled to expect that the number of fast services to Waterloo (i.e. the 15-15-20 minute non-stop services) will not be reduced and that it may be possible to increase the number of fast services, which would be welcomed.

29.      Factsheet SW5 (Kingston and Norbiton) notes that “Existing direct links between Kingston, Twickenham and Richmond would also be retained.��� This position should be maintained.

30.      Kingston Station is poorly designed, laid out and maintained. It is overdue a significant overhaul that will certainly be necessary if peak time services are to be doubled with Crossrail 2. Moreover, although Kingston Station is said to be step free access, accessibility needs to be improved.

31.      Factsheet SW1 (New Malden and Motspur Park) notes: “Raynes Park and New Malden stations will also require work to accommodate the new infrastructure, improve passenger circulation and help speed up interchanges between services. This could include installing additional platforms and lengthening existing platforms, as well as changes to signalling and other station improvements. The plans are still in a very early stage of development and we will carry out further consultation with the local community about the scheme as it develops.” A station upgrade at New Malden in addition to making it step free access is long overdue and would be welcomed. However, the nature of the infrastructure, including the potential for new and/or extended platforms, would need to be explained in detail before this proposal can be commented on.

32.      Factsheet SW1 (New Malden and Motspur Park) notes: “we will need to install some new track between Wimbledon and New Malden”. The location and consequences of laying this new track will need to be explained before this proposal can be commented on.

34.      I have attached some submissions I have received from local residents on the Elm Road and West Barnes Lane level crossings.

35.      In due course I will send you my response to Rail Executive’s South Western Rail franchise consultation which addresses broader issues with rail services in the Borough.